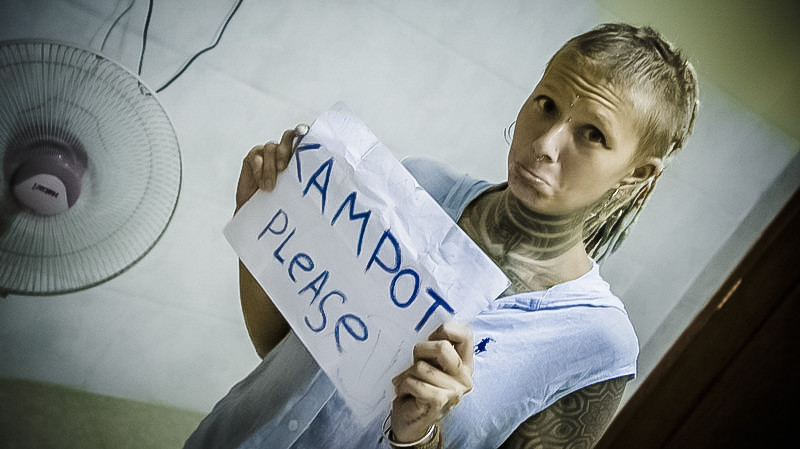 After a few days after visiting  Kampot, we packed our backpacks and asked the question "Have Cambodia hitchhiking or not?" We took our backpacks and went to the road. Little marched through the city on foot, to the highway we went by small car. For those who know the geography of Sihanoukville explain - our first point for catching the car became a place not far from the brewery. 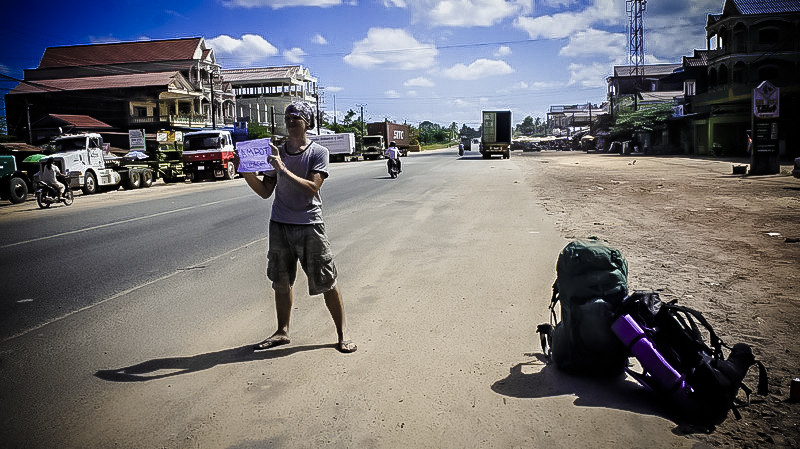 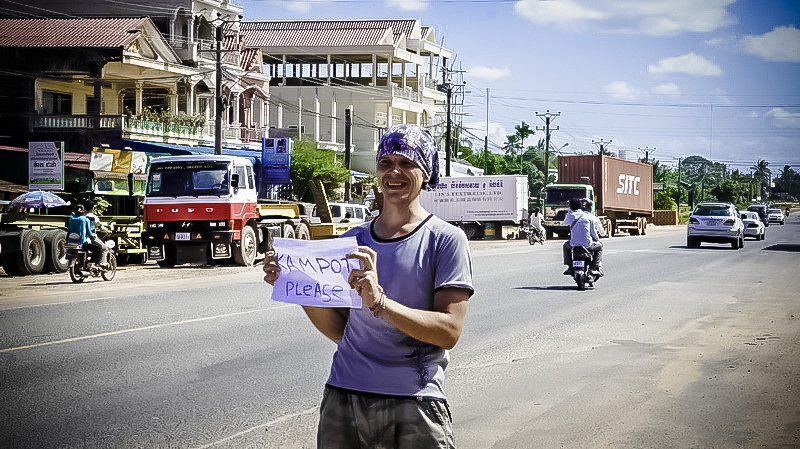 Stood with a funny sign  not more than half an hour - and we picked a huge car which goesPhnom Penh, ie from the port city to the capital)))) The driver agreed took us to the fork where our paths diverged, and the distance is equal to half of our journey. Surprised by so fast stop we climbed into the cabin with all belongings))) 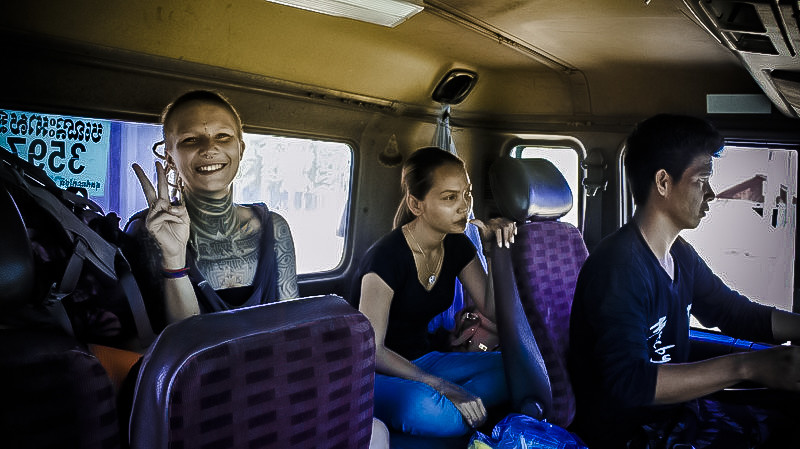 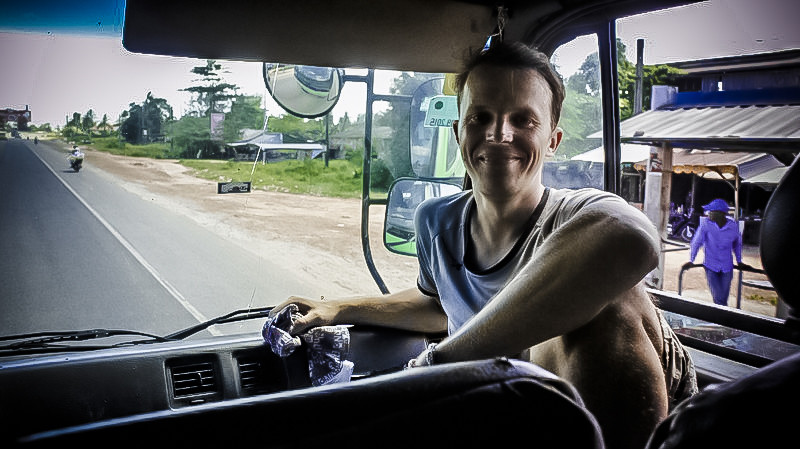 " They have Hitchhiking in Cambodia!" -  we decided and happily smiling all the way. Thank our benefactors and going out at the fork, we shuffled to the most direct, already leading directly to Kampot. Along the way, we were offered a highly loaded Rouge, bales and tourist bus, but the answer "no money"  fall off them. Laughed at barkers, we are located in the cozy shade with a whole bottle of refreshing water. Before we pick a sign and hands as we stood in front of the pickup. "No money" - puzzled we said, - "Go Kampot" - referring to the label and exchanging glances. "No Worry!" - Fun to meet the carrier, and we do not believe his 5-minute stop, climb into the back. 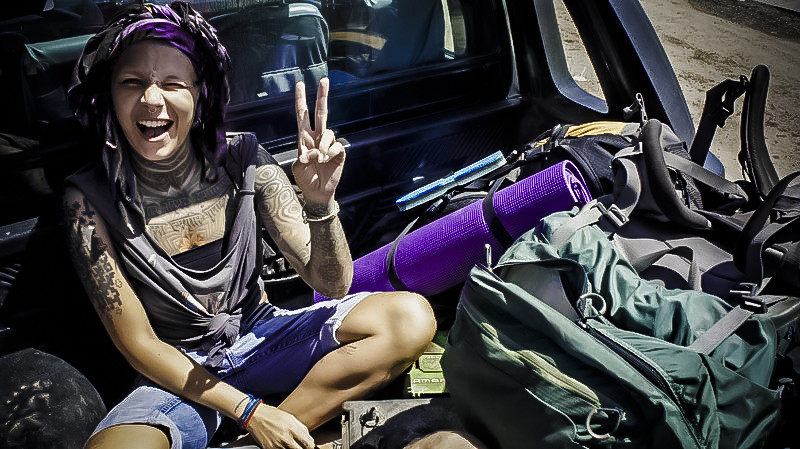 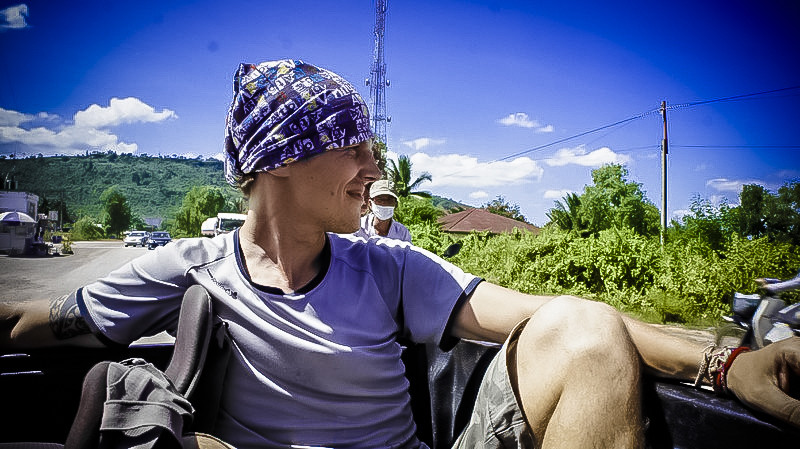 It is worth noting that we left more comfortable and fast than the tourist bus))))  We arrived at the  center of the city, walk a little to the well-known guest-house. On the road we spent 2.5 hours and passed 120km. 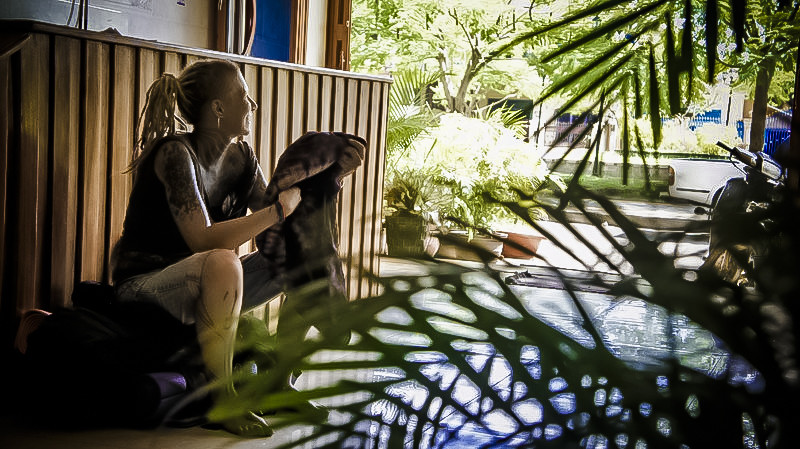 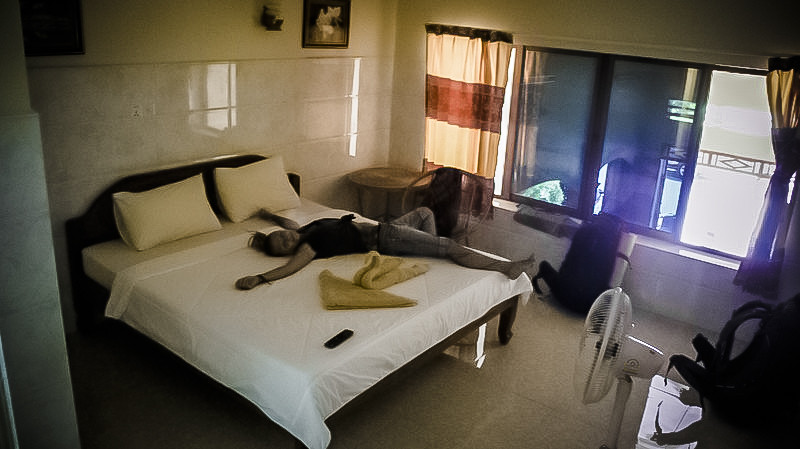 Guest called Captain Chim, it is not far from the only one in the city boulevard, rooms from 7 $ and dorm for 3$ ))) Room was cool, with a balcony overlooking to the room . 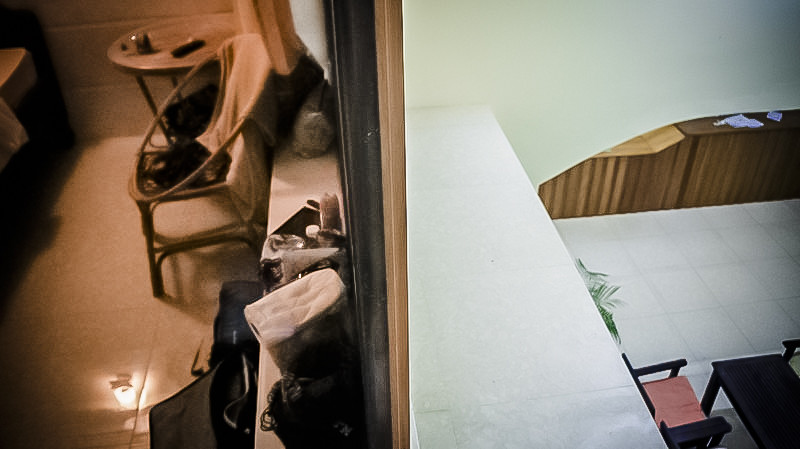 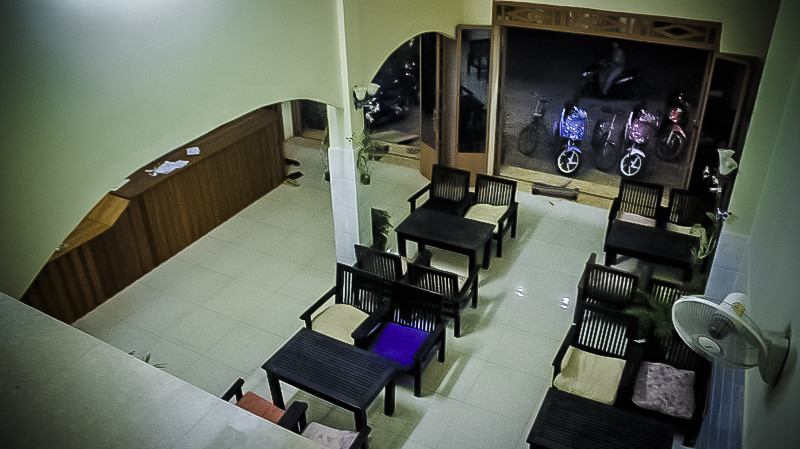 What about Kampot? The town is small, nice, the French built ше up that architecture is fully confirmed. The town has a promenade and two bridges across the river - separately for cars and bikes. 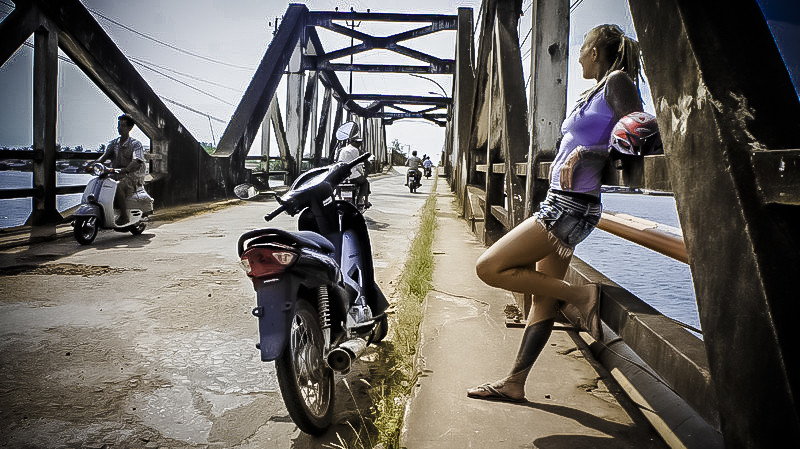 There is unusual for Asia and the familiar to the Moscow Boulevard - real, with benches and trees))) 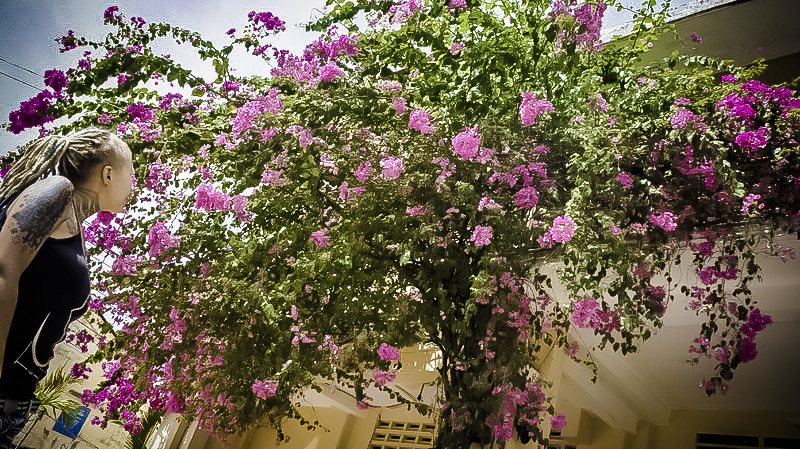 There are two tattoo studio, no one of which have any sterilizer. Well,  this is the norm for Asia))) Also met a really nice woman Christina from Barcelona, who, like me, making soap and  squeezing oil from coconuts. I bought a small bottle of coconut oil for 2 $ - smells magically, moisturizes superbly. Will be in Kampot - I recommend;) 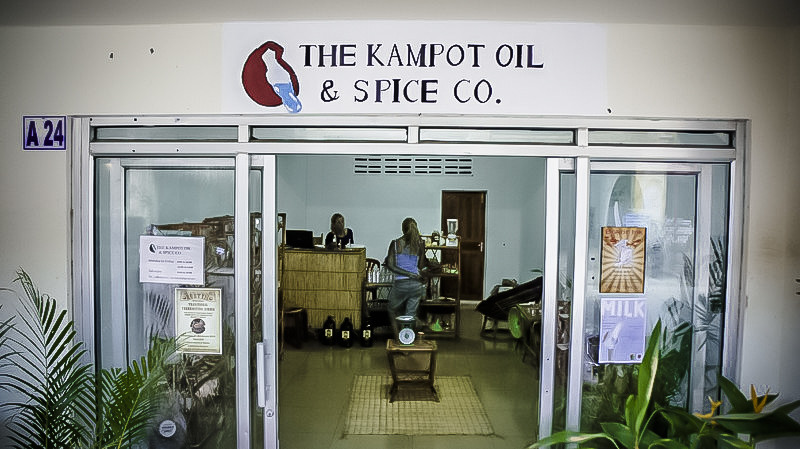 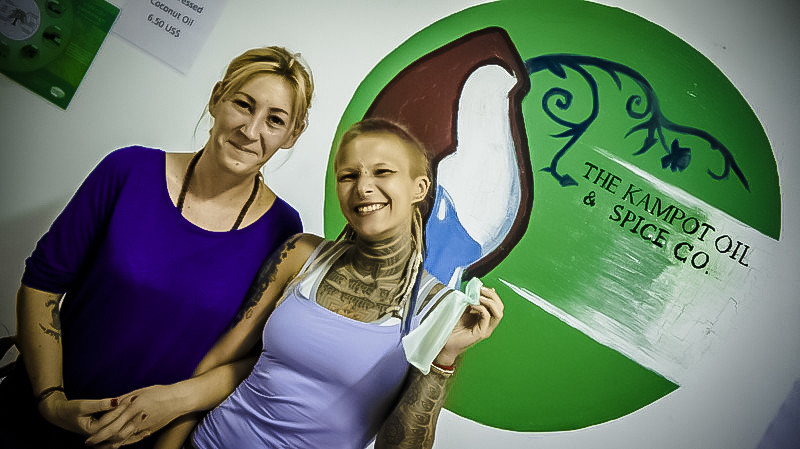 Again, the town is very small and in the evening anyone knew about us. This opinion has been formed, because the same evening to me rolled guy on a motorcycle, you would not believe, "Minsk" and asked if I was "this Russian girl, who came today" in Russian, respectively, language. Well, apparently, that))) So now there 3 Russian in Kampot - we and Ian from Perm. 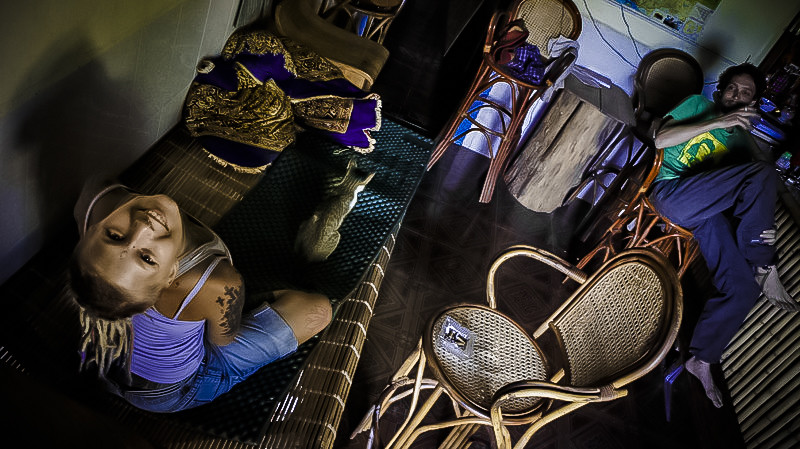 You can rent a bicycle at every corner, 1 day for 1 dollar, so we do not miss the opportunity and traveled the length and breadth of the city for 1.5-2 hours. 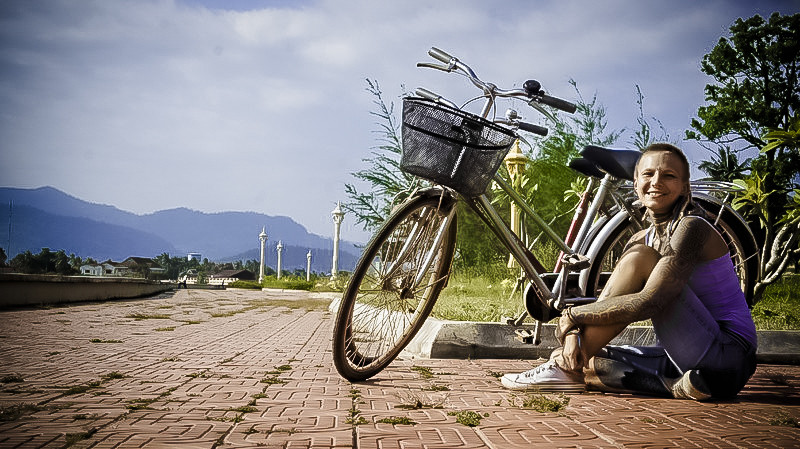 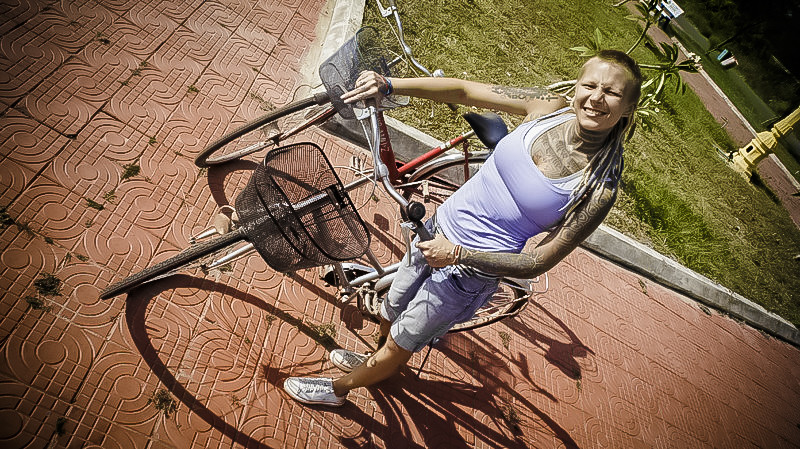 For longer trips we rented motobike. Cost 5 $ a day, amused that without numbers. Given the constant rumors of thefts, their absence was not surprised ... 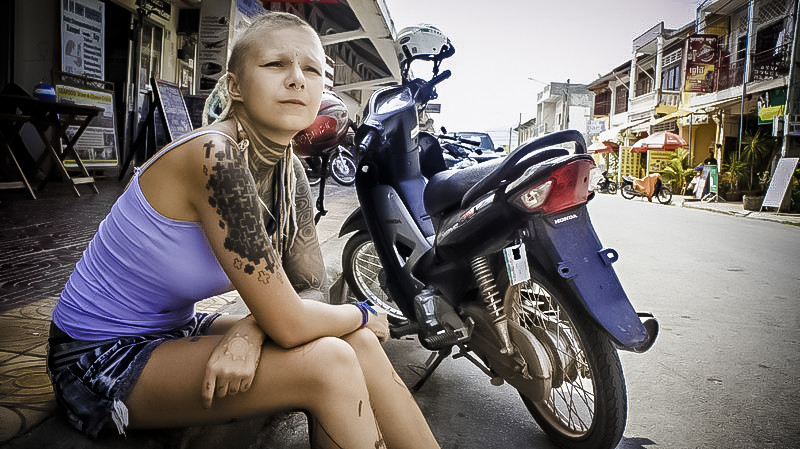 On the bike we went up the mountain Bokor height 1078m. The roads are dusty and cows on them is not uncommon, even saw a cart pulled by oxen, but no have picture ... 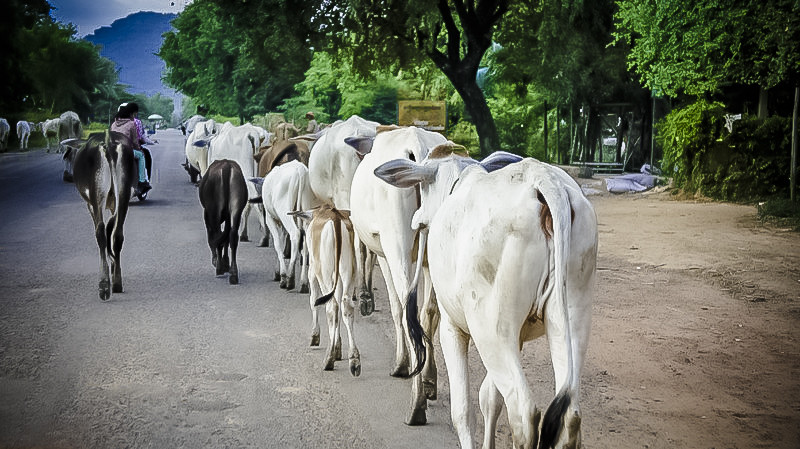 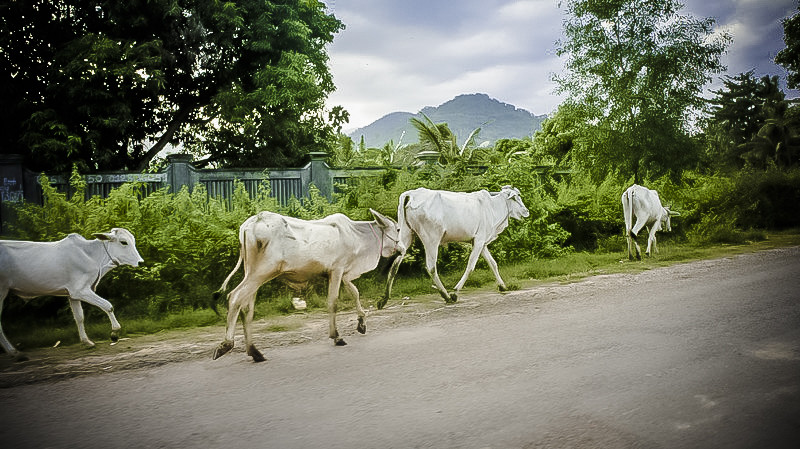 The weather was beautiful, the sun was shining and it seems it was around +30 degrees ... but the higher we climbed, the colder it became .... 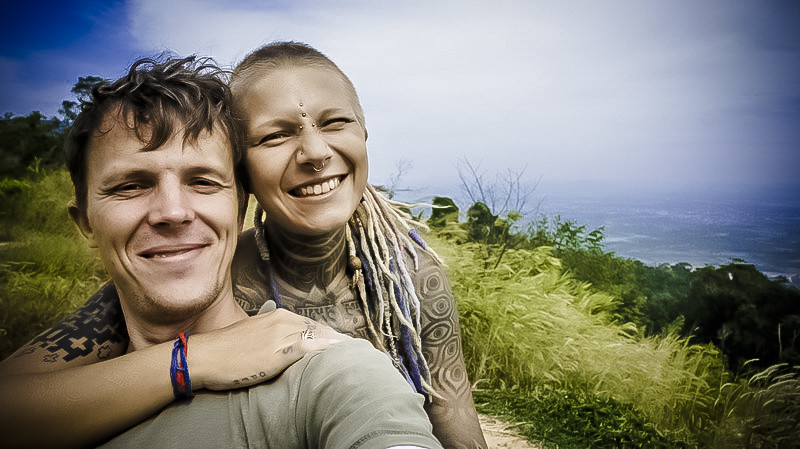 Reaching the top, we can't make pictures any more.... Have you ever rubbed your fingers on  asphalt? Have you ever searched for a place where asphalt black and, consequently, heat to flatten it as much as possible? If not, then you have not been at Bokor, because we did))) I never would have thought that in Asia you can freeze))) We called Bokor "Asian Arctic", it's cold so much that your teeth chattering)))) Come back home and drunk hot tea, so do not catch cold))) 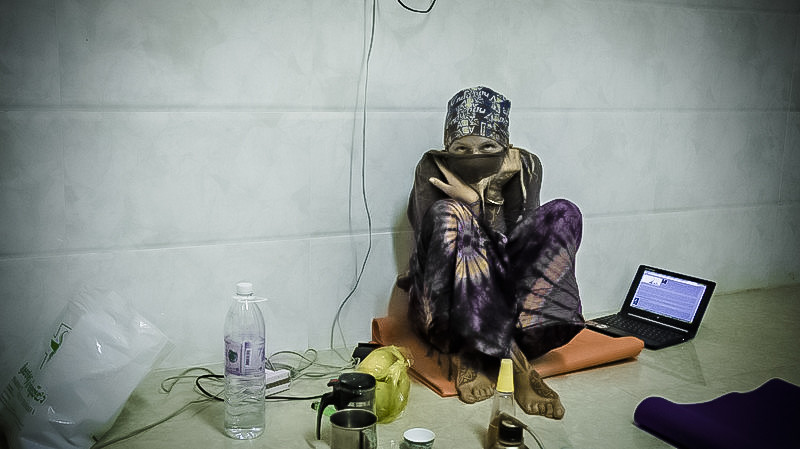 A second attempt to storm the Bokor will take tomorrow, dressed up all the available clothes.

I think that would be cool!