The First suspension at Koh Phangan 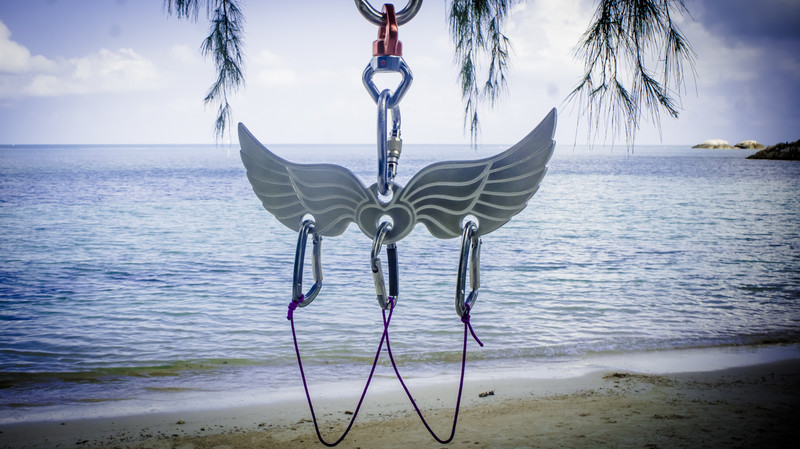 Sam Lowry (Max) wrote about everything very good. So here is his interview.

1. How long have thought about the suspension?

9 years ago in some LJ community I saw the photo - guy hanging on hooks in his knees. Appeared incomprehensible craving for it ... And then I spend all my time with the computer. There was another problem: the childhood spent under droppers, made itself felt. From any human intervention in the integrity of the body (injections, punctures, deletions nerves in teeth, suturing) blood from the brain drained and I have long departed from near syncope. That is beyond crazy idea, in which I had no idea how I would do it in reality, it did not go.

Suddenly, 20 October 2014, at the mystical island  Koh Phangan, I accidentally meets Sasha Shanti with her boyfriend Alex Zhuravlev. I have to stock one, the next day, after I depart for the mainland. Sasha readily responds and we assign the suspension the next morning!

2. What was the motivation?

As I said above, the suspension somehow immediately attracted me. All of my "I" was drawn . Later I learned the topic and found out that the suspension may be a mystical ritual way of changing consciousness, the ability to make growth on themselves to go beyond the pain, to transcend fear. But the main thing that attracted me - this is the thrust. How to explain why you love someone? In my case, as it was with the hanging!

3. How do you piercing procedure?

Naturally, since it was the beginning of the process - it was a little scary. Do not want to look at the process of folding tools and drugs :) As for the procedure itself (and indeed all subsequent actions) -they  both provides the emotional comfort that was very easy to relax. For me, the guys at this time and in this place was ideal masters :) Alex Zhuravlev broadcast a sense of calm and security, and Sasha Shanti - feeling of freshness and enthusiasm. When the instructions on the seemingly brutal procedure gives you Sasha Shanti - skinny blond girl, speaking in a soft voice when these instructions are poured by simple examples and innocent joke, hard strain, drive and treat the matter too seriously!

Technically piercing were made very quickly. In both cases the pain was momentary and non-intensive, tips Sasha Shanti on how to breathe during procedure reduced the discomfort at times.

5 minutes after the hooks inserted, blood go away from the brain and beginning to cast about 15-20 minutes, I dealt with this condition, in-ground, lying or sitting, drinking coffee, water, and while chatting with the guys. When the condition has stabilized and we rode bikes on the beach, I'm used to the hooks so that absolutely stopped them feel at this time I began to shake from excitement, teeth started chattering, and the world was perceived very intense kinds phangan's nature calcined fluids delight.

4. As the process itself? 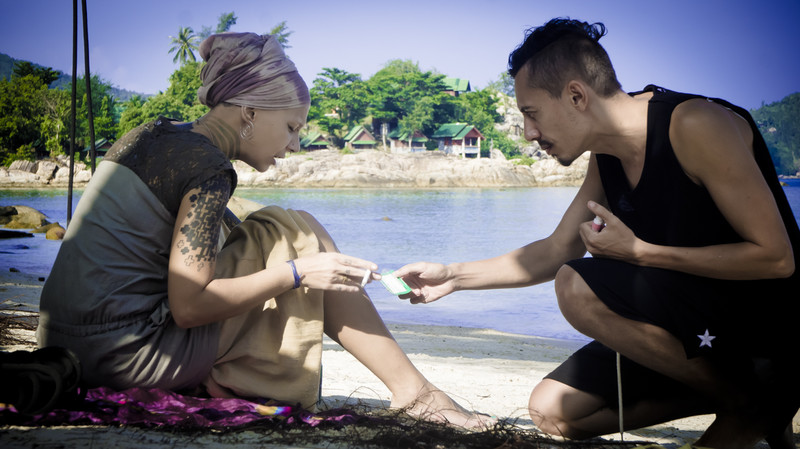 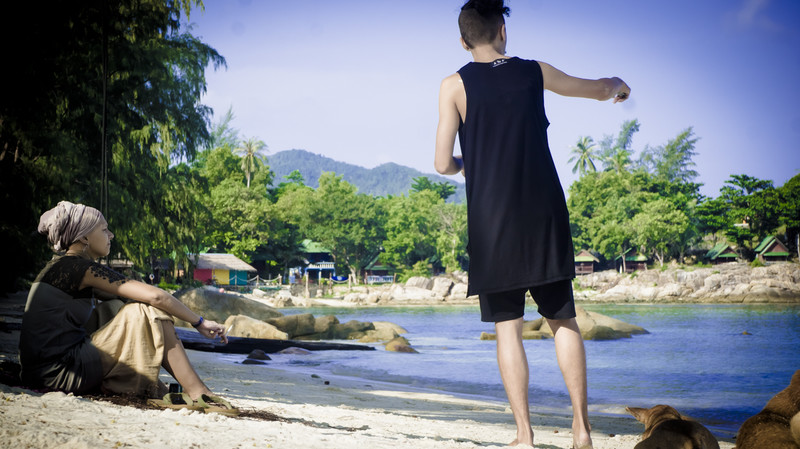 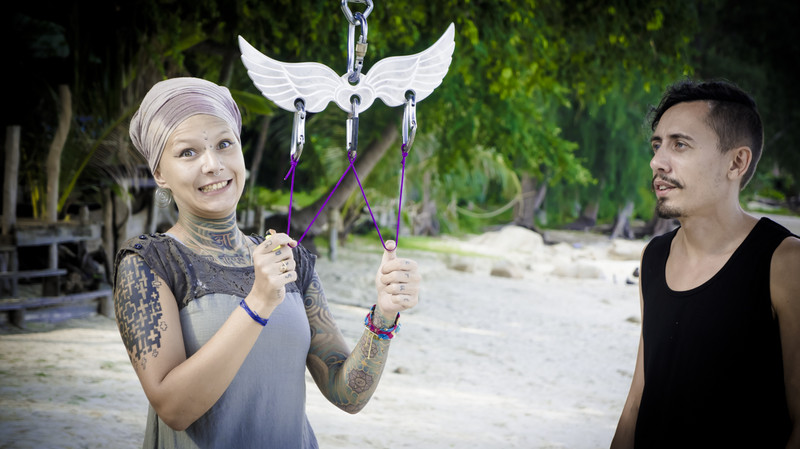 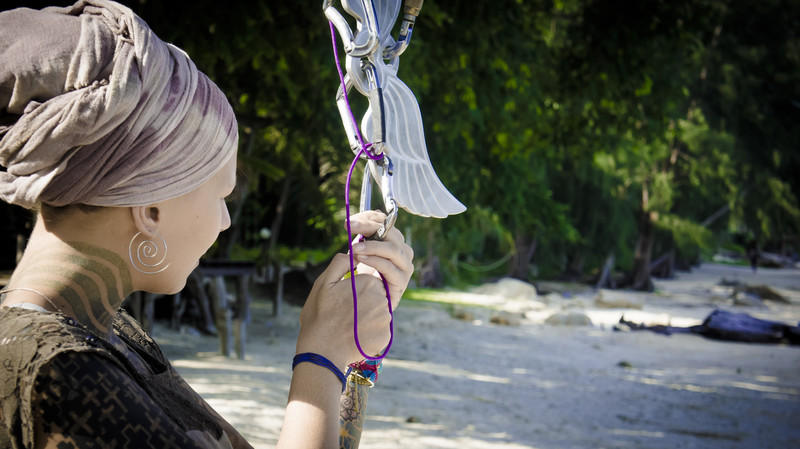 When we arrived at the beach and I'm used to sealed plaster hooks - again became plagued by doubts: "I will survive as a suspension? Now well - nothing pulls hooks, no pain, and what will happen? "Here, again, the advice of Sasha on what to do during a lifting really helped. 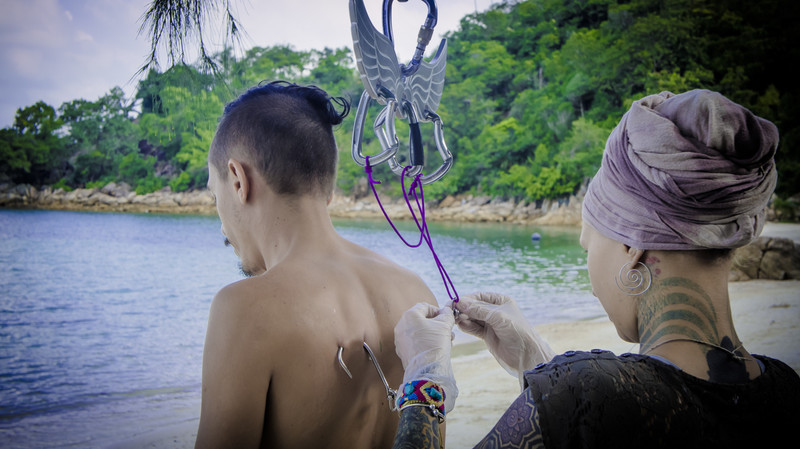 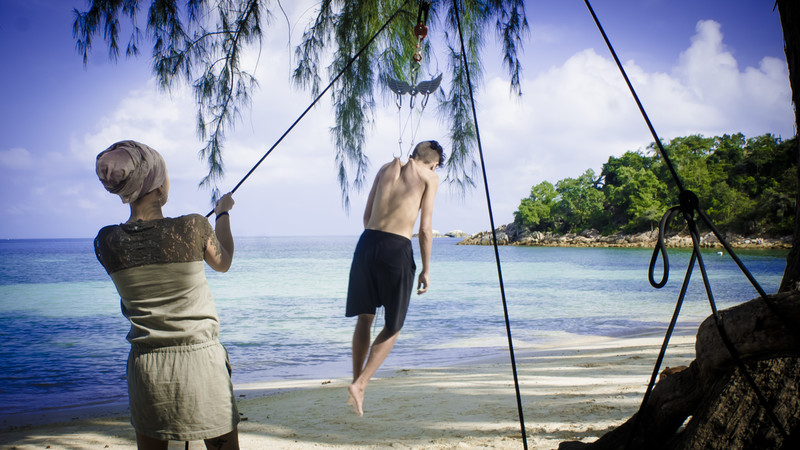 I read before that in the first moments  body is going crazy, sends signals "will tear the skin," "where, and why the hell are dragging me?" And that if the deal with this primary urge - all will be well. Cope came out very quickly, good, I closed my eyes and completely dipped in sensation. From the intensity pain was much lower than from piercing, but prolonged. 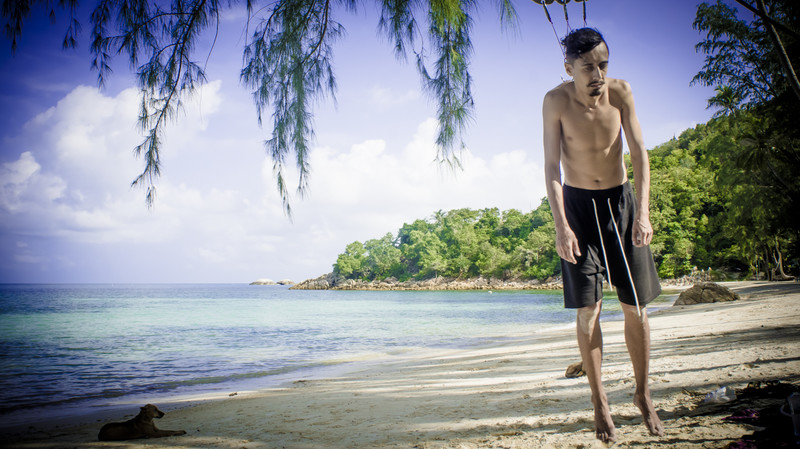 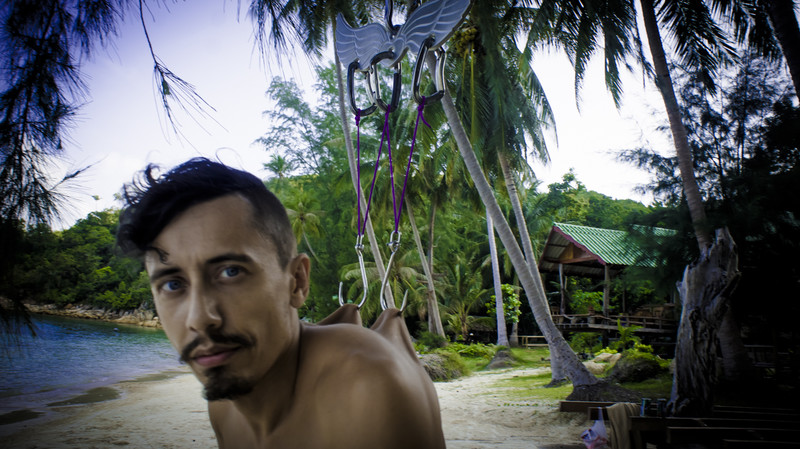 After a minute and a half  pain was completely gone. More some time had a strong discomfort that the skin is pulled together torso. I felt like a bag of bones: the neck was involved in the shoulders, arms lift was hard, the bottom of the chest is squeezed. After a while I got used to it and started to feel much freer.

In-principle, this all sensations in the body and consciousness is almost finished. For a while I looked at the sea and nature, enjoy the feeling of suspension and rocking. 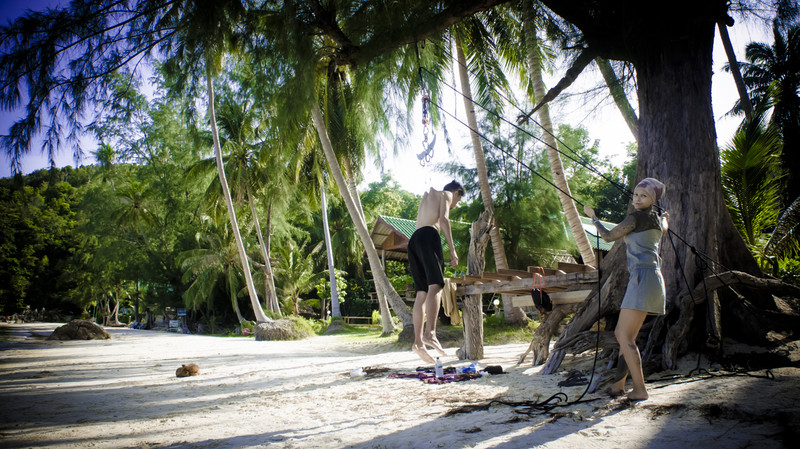 Then I switched to the feeling that comes from the guys. Energetics of people in limbo felt much more intense. When Alex Zhuravlev stopped my hand spinning or swaying me stronger - rolls male mind when Sasha Shanti took me by the hand and began to rock - it seemed that it connects me to the ground, I was permeated feminine energy.

I started chatting with the guys about what for them are the hangers. The conversation in this state, when you have given with him to make such and when you care about, I feel like some kind of intimate act as if we are very close friends. Generally me in his own hit these people making such a strange thing for many of their wards and provide such comfort and peace of mind :)

15 minutes later a new sensation stopped coming and I asked to pull me to the ground. I felt my usual weight, how vertebrae press against each other, from the flight in weightlessness returned to earth :) Alex Zhuravlev interviewed me on camera  and Sasha Shanti sidled up to lower the hitch to the back and covered their. To my surprise, I did not feel anything at all. 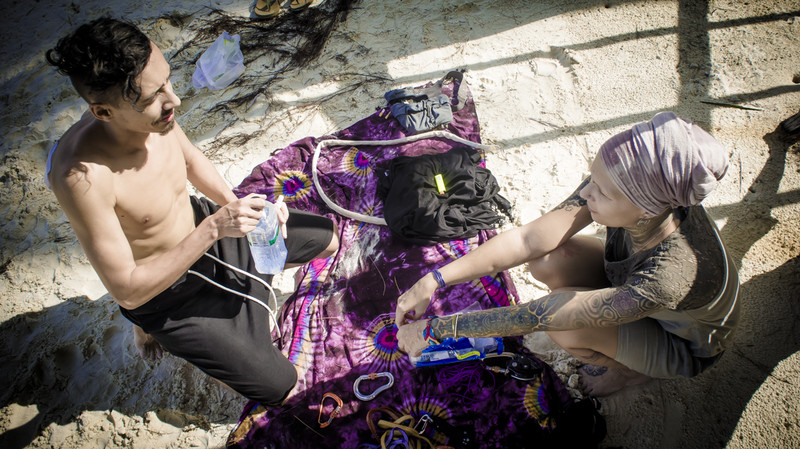 As we drove home, I was very relaxed and had a very positive emotions. Continued to fly :)

The greatest pain I experienced after the hooks removed and began to massage my back, squeezing the air under the skin. It was a long and hardest :) 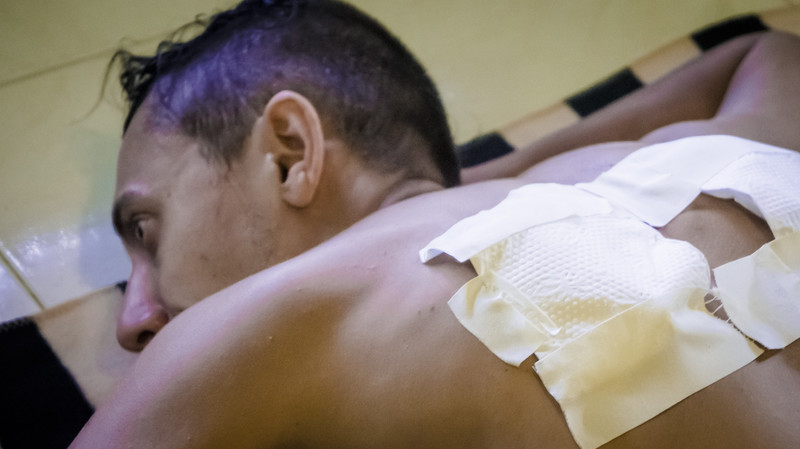 5. Did you get your expectations? How do you feel after?

First - about the feeling after suspension. Light, barely noticeable pain in the skin of the blades. From scorching sun, or rocking hard massage pain stronger :) sleep on your back, you can immediately. The skin is slightly crispy on the left beneath the small air bubbles that will soon go away.

Now, about the expectations and conclusions ...

I have long been trying to cut off all expectations, not to lubricate the enjoyment process. Whatever and however much I did not read about suspensions - to the guys I came with an empty head.

After the process has already begun to analyze. What I can say:
* who lived in Thailand - most likely fell from the motorcycle. So, even the most minor abrasions resulting from contact with the asphalt in its totality (at the time of the accident and during recovery) cause more pain and trouble than suspension. Yes, the suspension looks terrible, brutal, it seems that only uporotyh. But it is only an appearance!
* I posted a few photos and videos to Facebook  and got quite expectable comments of three types: "why?", "phew, what crap!", "well done, that you have the courage to try what you want." Well, a lot of any of its projections cockroaches on me. Guys Think about where you are in it :) The whole comedy of the situation is that those who have sharply reacted to the suspension, not trying to figure out what it is. As already written above, if and asked questions - what more rhetorical. The right question - "Tell me what it's called, I googled and try to understand what it is" - not! Many of these people drive motorcycles, and generally subjected to a lifetime risk of pain and danger, which is much higher than that of the suspension, but since everyone is doing it, and everyone pretends that it's okay - the question "why?" And "what are you, moron? "no one there. I do not blame anyone, it's a normal reaction to events that pose a threat to man's inner world. However, if you want just a little to evolve - I would suggest that you still try to understand first of all by yourself, and then ask the people who tried it, the right questions :)
* amazed that so little pain and process more shrouded fears and prejudices!
* I am most sausage in the previous day, the positive and the joy of the coming of the suspension changed to nervousness and irritability. And very happy that the day of the suspension, despite several near syncope, I was able to cope with the pain and fear rather easily
* a bit disappointed with the result that there was some changing states of consciousness. Though in fact they were, but very soft :)
* Experience is very expensive to communicate with Sasha & Alex :)
* well said Sasha Shanti - "in Western society on pain taboo, sick and dying hide far away, but would not see them," and this is very common with Osho words that negative emotions is taboo. With negative emotions and pain is worth to have the same friendship, as with positive emotions and pleasure. And then the pain will be less :) This is Buddhism, baby :) Naturally, I do not call anyone to repeat my experience, I am not advocating suspensions, each goes his own way. But if you still think about and explore the topic, everything is not as it seems :) I wish you to make friends with the pain! :)))

So, Max, Thank you sooo much for this experience too! Welcome again! :)