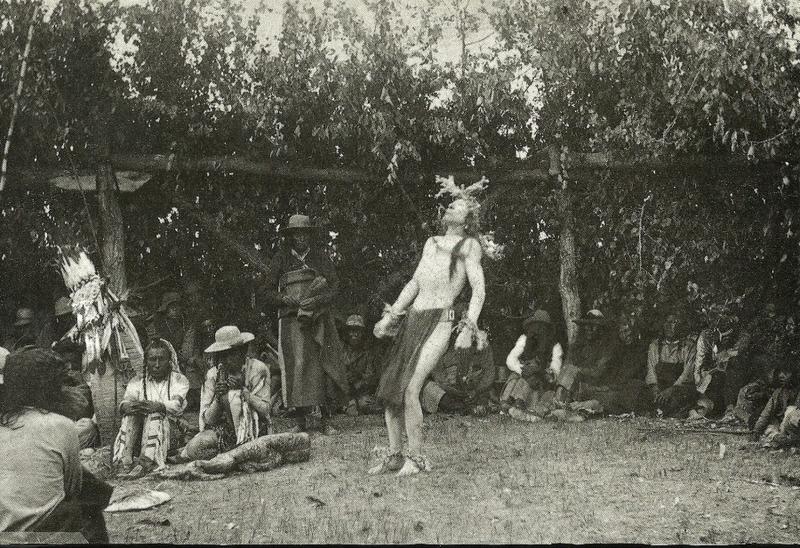 Sun cult was prevalent in agricultural people's eligions in America & it closely connected with fertility rites. With the relocation of the same agricultural tribes in the prairies and their transition to hunting and horse breeding, this cult changed.
Buffalos has big value in Injuns lives, so it's not surprising that the most important things compilated in syncretic cult, which included veneration of the sun and buffalos. A good example of this given by te-ton tribe, which representations that buffalos is a "people of the sun", & the owner of the buffalos is a "friend of the sun".
The clearest manifestation of this was a complex of cults at the summer festival which they called "Dance of the sun". This ritual has gained importance not only of the main tribes, but for all American tribes in the praires.

By the end of the XIX century this ceremony spread with slight variations among most of the Injuns tribes from Ojibwe in Saskatchewan (Canada ) to the Kiowas in Texas (USA).

Merger of the sun cult and the buffalo cult manifested itself in the external ritual festivities. Buffalo skulls occupied the most important places in it. It was placed on the altar in the center of the temple, near the "pillar of the sun". The Master of the ceremony also weared buffalo skull. Sacred food during the festival consisted of buffalo's tongues. Each tribe had their own practices but most of them has the same elements, including dances, songs, prayers, fasting & self-torture.

"Lakota" tribe make ceremony this way: they looking for a "Tree of Life " in the forest, next, choose a bold or honored warrior who cut it. Tree isn't touch the ground , Injuns cut the branches & transport it to the place of the ceremony and set in the middle of arena. Sun Dance began at the next morning & the participants looked at the rising sun.
They placed buffalo skulls aroun arena and attached leather strapes to the pillar in the center. Dancers make incisions on the both sides of the chest, put bones inside the wounds & attached them to the pillar. Dance began. Purpose of it was tear up the inserted bone from the body. Dancers pulled it back & trying to tear their flesh . 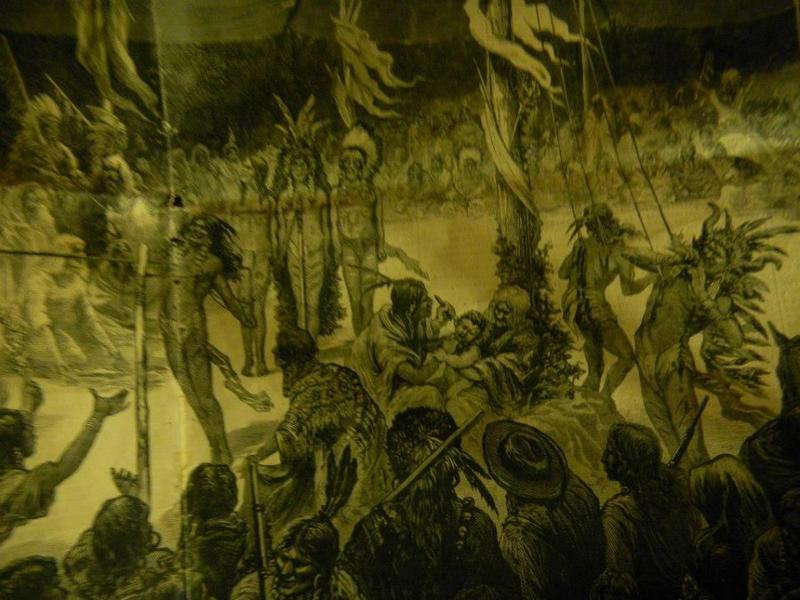 Another version would attach the buffalo skulls in the same way to the back & running as long as the skulls does not come off. Those who can't do it himself asked help from their teachers, and they pulled them back. 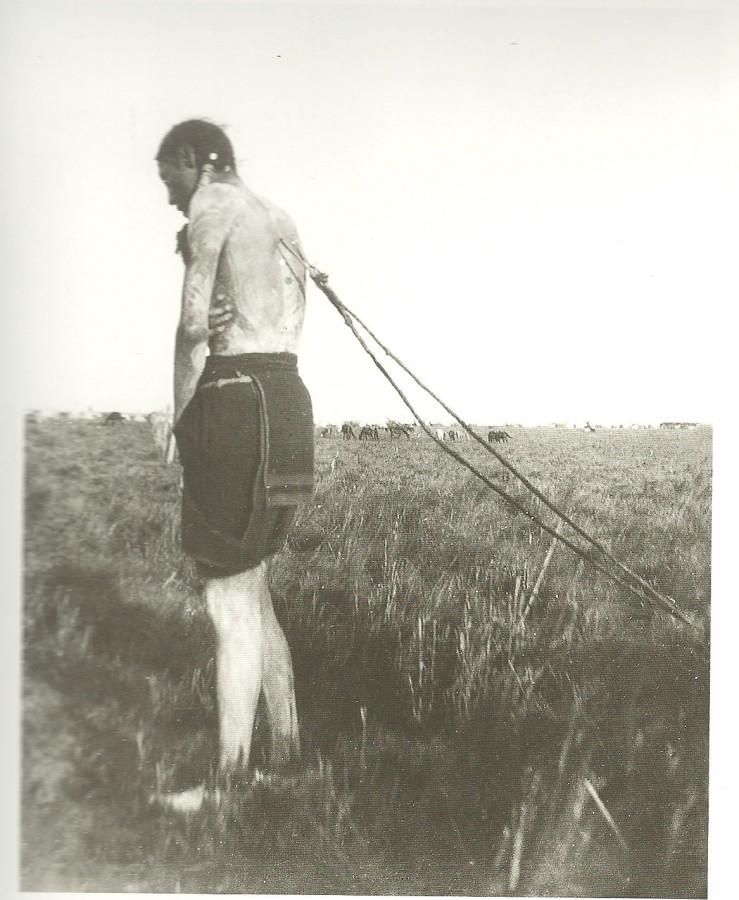 "On the first day of the ceremony, about ten o'clock in the morning when I watched the dance, three Injuns went to the arena, two of them carrying two stakes each , and the third, almost naked, - leather belts and pins. They chose a place near the center and put stakes in the four corners of a square area from six to eight feet. Whoever was holding straps and pins proudly entered to the center of the square, while the other two quickly fastened straps around the stakes of that length, which was sufficient to reach the victim's chest and back .
A few minutes later, schaman came to the victim, said some spells and prepared man for the hard ritual. He pulled on the breast skin between thumb and forefinger, pierced the skin by knife and put the pin with attachment straps. This procedure was done on both sides of the chest, and then on the back. The pins were made of hard burnt dry wood, about three inches long and with sufficiently sharp hooks on the edges.

When everything was ready the man began to sing and dance to distract his mind from the pain. He gently bent over backwards to shift the weight of his body on the straps. He save his courage and determination for the first jump, but strong skin stretched to ten or more inches... He doing it several hours, with the rest in a few minutes; expression on his face at such moments reflecting the full commitment to action bordering with madness. I stood next few hours at the arena, and returned home with a big compassion to this men. When I returned by noon of the next day, I saw that he was able to unhook the right breast; I've seen a huge loss of power and frequently also. His voice was weak so he used a whistle. About an hour later he came to release his left breast, which was accompanied by a sound like the explosion of the detonator; then he took a long rest, during which he was breathing heavily and was completely sweaty. But it was evident that this man felt a deep satisfaction at that moment.

After a the rest, he resumed his torture with more savage intent, because he was free from the straps on the chest he has more freedom of movement. Dancing, he moved between the strakes, stopping for a moment and then walked in a circle with the ferocity of a raging bull. I saw how he tear up his right shoulder, and then left him. By questioning the next morning, I learned that he had freed himself in the evening and then fell to the ground. Then he was taken to the nearest tepee, where he died from his injuries. 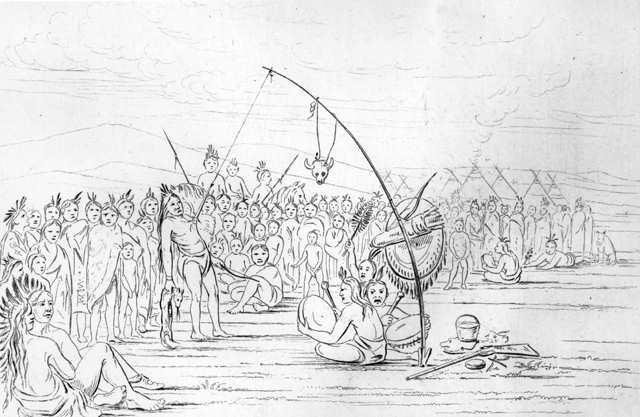 As I watched that barbaric scene described above, into the arena to dance came a tall, muscular and almost naked Injun. According to the sign of the shaman, he lay on the ground. Shaman stretched the skin at the lower back and stabbed here three pins with attached bison skulls at the ends. When the pins were fixed, the man stood up, trying to stand up straight, and after a while began to sing and dance in a circle to get rid of the load at his lower back. I saw how he snatched one pin and then others. All procedure took one hour or a little bit more. When the dance was stopped, skulls almost touching the ground. According to the laws of the tribe, he could not unhook these skulls dancing or just running, but could to asked help to tear them. So he called two his friends and they riped the load in the presence of witnesses.